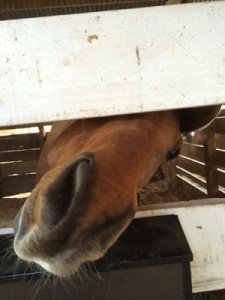 The first time I met him, I knew. I had been waiting for him my entire life, and there he was. I knew this was a dream come true. I did not know how much I had to learn, how brave I’d have to be or how far we had to go.

I did not know I would have to learn a new language – that movements natural to me were confusing to him. I did not know how to draw the best out of him – how to partner with him. Early on in the process I realized something important: this horse would teach me how to be a better leader.

Building trust was the first step. My first understanding with Fortunato is a compelling leadership lesson. Until there is trust, you cannot move forward.

So I studied him, spent time with him. I watched his reactions and movements. I also became more aware of mine.

At the same time, I expected the best from him. I believed that if I could find the combination, I could unlock and release the most amazing potential in both of us.

What if every leader stopped for a moment to ask these questions of themselves? What would change if we agreed that trust is the first imperative? What would happen if we believed (completely) in the potential of our team members and business partners? What if we trusted ourselves and others more?